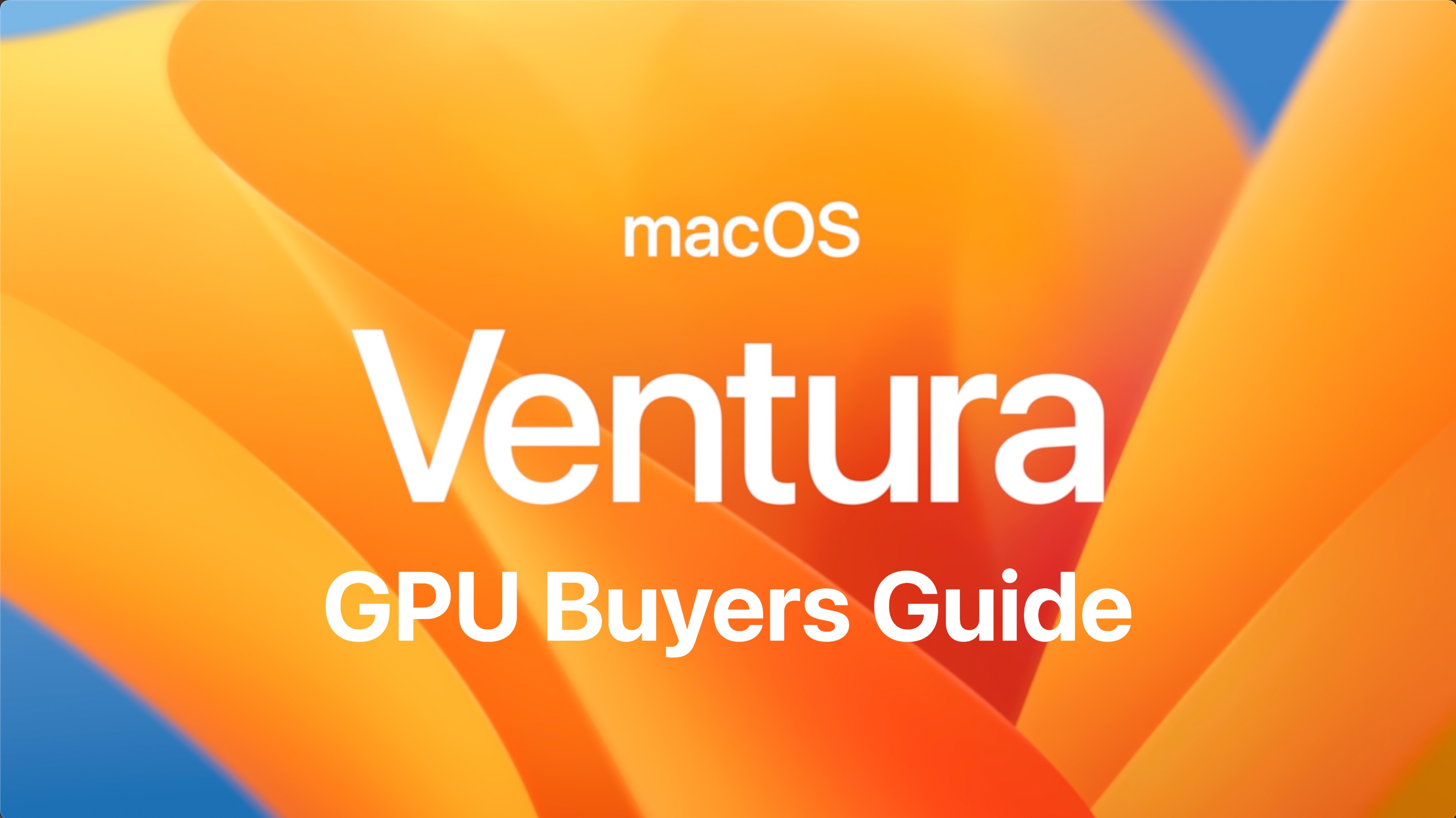 So it's that time of year again, a new version of macOS has been released and the age-old question will be asked once again:

What GPUs are supported with macOS Ventura?

Well, you've come to the right place, we'll give a quick rundown on the situation and go into more detail on exact GPUs we recommend.

# A quick refresher with NVIDIA and Web Drivers

Well currently as of the time of writing, we've gone multiple OS cycles without official drivers from NVIDIA for their Maxwell, Pascal, Turing, or Ampere GPUs. What this means is that users of these GPUs have no support for Mojave or later, so they're stuck with macOS High Sierra. Who's to blame? Well it's 2 giant, egotistical companies who both refuse to work together so the blame can go both ways. Do keep in mind that the WebDrivers have a VRAM leakage issue that they've yet to address, so a theory to why Apple refuses Nvidia drivers in macOS may be due to how Nvidia refuses to hand over the driver stack. Think it's a coincidence that both AMD and Intel have open-sourced drivers? Well, either way, it doesn't change the fact there's no support.

Kepler has been dropped in macOS Monterey, meaning there is no support for any NVIDIA GPUs anymore.

And for those who want some reading to do: When will the NVIDIA Web Drivers be released for macOS Mojave 10.14 (opens new window)

Great read as it shows how even upper management doesn't have a good answer for customers.

# So if my GPU is natively supported, why do I need Lilu and WhateverGreen?

This question comes up quite a bit in the Hackintosh community, and for good reason. Why in the world would these GPUs work out of the box on a Mac and not a Hackintosh? Well, the reason is that PCs and Macs have different internal wiring and so the ACPI layouts in a PC don't work well with macOS in different scenarios. To get around this, we use WhateverGreen (opens new window) and it's companion Lilu (opens new window) to patch different parts of our Hackintosh, like renaming devices, assisting in framebuffer connections, patching audio connectors, allowing modifications to aty_config, aty_properties, cail_properties via ACPI and so much more. With such a large feature set and developed by someone who knows what they're doing, there's no reason not to use it.

# So what are my options?

macOS Monterey dropped support for all NVIDIA GPUs, including Kepler-based cards, meaning AMD dedicated GPUs and Intel integrated GPUs are the only way to go for the latest version.

# Can I run an unsupported GPU in my hack?

So, something to keep in mind when running an unsupported GPU in macOS is will fall back on VESA drivers when no real drivers are present. These are very simple, CPU based drivers that are used as a stop-gap while you wait to install the correct drivers, but many basic functions of macOS are broken when running this, including sleep and general stability. And since these GPUs have no drivers even outside of Apple, we need some way to stop the unsupported GPU from being recognized in macOS. See the Disabling GPUs (opens new window) guide for more info on this.

But can I render macOS on my iGPU but use the video outs on my unsupported GPU?

Unfortunately not, and the reason is actually quite similar to how NVIDIA's Optimus technology functions. You would first need a way to grab/encode the iGPU's signal, send it towards the discrete GPU, then have said GPU decode the signal and display it. One small problem, decoding the signal would require proper GPU acceleration which your unsupported GPU doesn't have. So you will need to use your motherboard's video out ports no matter what.