So where are the Nvidia Drivers?

There are none, stop asking. There will be no support for non-Kepler GPUs in Catalina, let it go man. It’s not healthy to keep a toxic relationship going, it’s best for the both of you.

If you need a new GPU, please refer to the new GPU Buyers Guide and the Disable your unsupported GPU Guide

What has changed on the surface

The average stuff, skip to What’s new under the hood for the more important info.

This is probably the feature users are most excited for, what Sidecar allows us to do now is run a supported iPad running iPadOS 13 to be used as a secondary display to either your Mac Hackintosh with minimal latency compared to duet display and Astropad with full Apple Pencil Passthrough.

But what’s the catch?

Well, the catch with this is that there are a few requirements to run Sidecar officially:

While it is possible to get around the SMBIOS limitation, it can be quite unstable for some users so we advise against modify the Sidecar framework unless you know what you’re doing. And users have reported in laer betas that these hacks no longer work.

While for some reason this is what all the headlines want to talk about, the idea of iTunes is not dead. Instead, it’s more of rebirth and cleaning of iTunes by separating it into 4 apps:

And the only real groundbreaking change from this is that your iPhone will now be synced through Finder instead of iTunes.

This one is my personal favourite as this will very useful for sharing files when troubleshooting Hackintoshes on the subreddit. But unfortunately were pretty stubborn in our ways so we’ll probably still be dealing with sketchy websites when downloading EFIs, but a slav can dream.

Have a serious problem trying to do work on your mac/hack without getting distracted? Well, now you can finally curb a bit of that addiction and be a bit more productive as long as you have the willpower not to disable Screentime. We’ll see how useful/annoying this becomes

Pretty straight forward, macOS will allow you to replace your password with your Apple Watch in more places. Do keep in mind this requires a supported wireless card.

What’s new under the hood 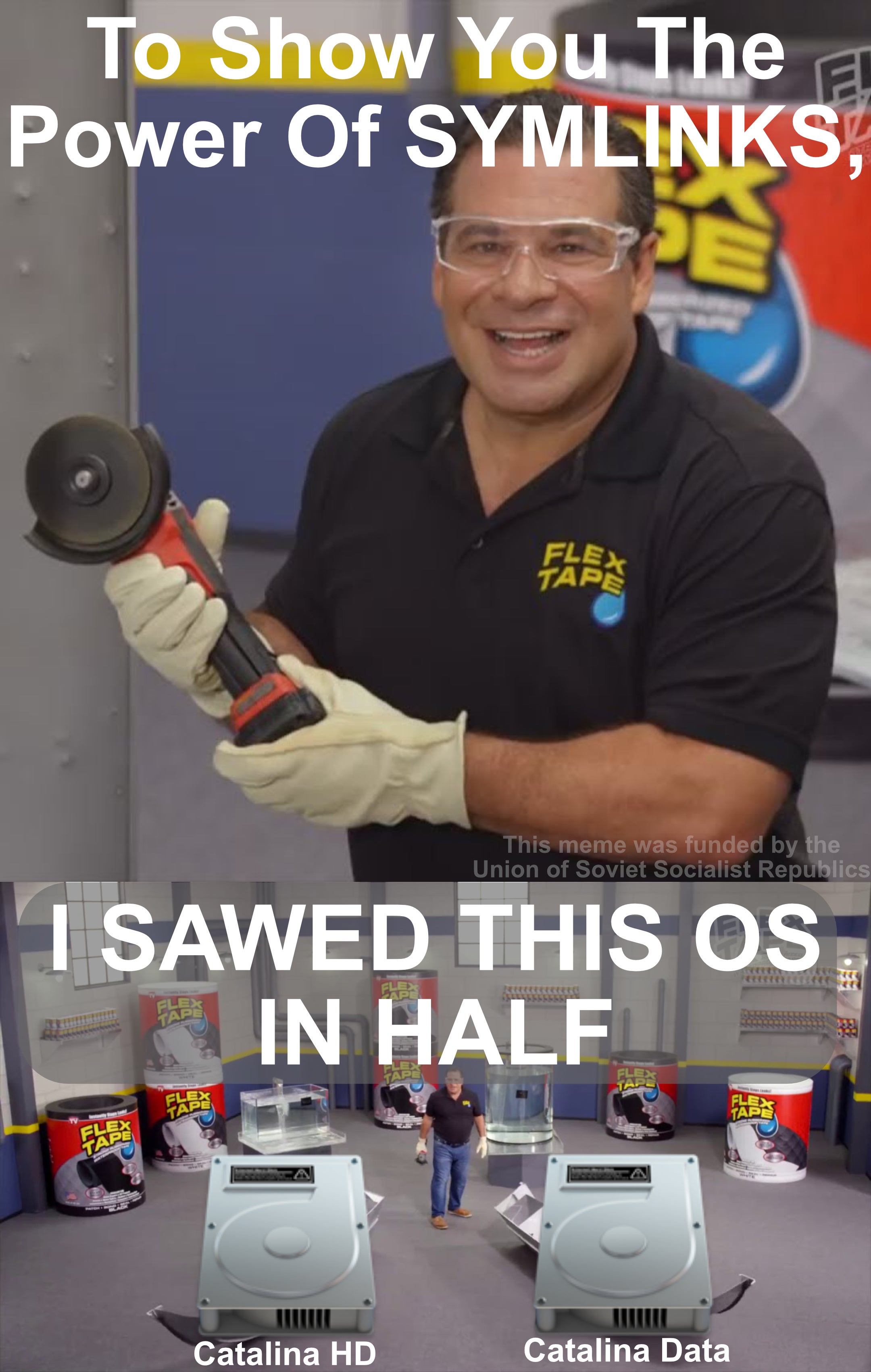 All system files were moved to a read-only partition

Probably the biggest change to Catalina is the separation of user files from the systems. Where this becomes a real problem is users upgrading to Catalina from an existing partition as files can become damaged/corrupted while the conversion happens.

To avoid this, make a new APFS volume just for Catalina and install fresh onto there. From there run migration assistant off your old partition and then delete it.

Another potential issue is that 32bit apps no longer work, the people who are most likely to be affected by this are laptop users who use USB wireless dongles that require old 32bit apps. And these apps are likely not to be updated.

But the upside to this AMD users will have much better AMD support for many apps, problem is that Apple that still call upon Intel specific functions still break. So depending on how Adobe handles this, Lightroom and others may finally be fixed(or we realize that there’s more code tied to Intel than we expected).

Quite an odd change is how the AirportBCRM4331 kext was merged into the AirPortBrcm4360 kext. While no hardware was dropped an odd side-effect came that AirPortBrcm4360 wouldn’t load even when BCRM4331 based hardware was installed. From my tests, an authentic Apple Airport BCM94331 would load without issues but third party models seem to be a hit or miss.

A solution to this is to force-load the AirPortBrcm4360 kext.

Well for those running older Atheros cards may have a rude wake up call, reinjecting the old AirportAtheros40.kext seems to fail on many systems. A partial solution is to actually port the entire IO80211 framework but this is not ideal for many reasons…

Only good solution is looking for a new card: Wireless Buyers Guide.

Removal of MacPro4,1/5,1 and the death of Dual Socket Systems

Press F to pay respect for our fallen Cheesegrater, you’ve served us well but it is time for you to go now and rest. One odd quirk to Catalina is that now no systems are supporting Dual Socket CPUs in Apple’s line up and because of this they’ve decided to change the AppleIntelMCEReporter.kext. This change causes errors when booting iMacPro1,1 or MacPro6,1 SMBIOS with Dual CPU configurations so we need to overcome this by blocking it. There’s multiple methods including making a blocker kexts, blocking via OpenCore or using CPUFriend. As things currently stand, CPUFriend cannot block but this may change in future releases.

OS Update break literally everything? Well now you don’t need to rely on third party software for snapshots, now you can easily return to a state where macOS wasn’t broken. This is done within the recovery partition.

Kexts moved out of kernel space

While this won’t directly affect us in Catalina, kexts running in kernel space will now be deprecated. What this means is kexts like Lilu won’t have the low-level access it requires to perform its necessary patches. But deprecation doesn’t mean removed, Clover’s kext injection system has been deprecated since 10.7 but Apple has yet to remove it from macOS(well 10.16 might finally change that). So don’t fear too much but keep this as a reminder that not everything will last as it is. Most if not all of Apple’s kernel extensions are still in kernel space so they got a shit ton of work to do themselves.

Support for Catalyst based apps

Get ready for a flood of iOS apps on the App Store cause now everyone’s a Mac developer! There’s no real hardware requirement besides natively supported hardware, that means users who have been patching their GPU drivers from High Sierra may have issues running Metal based applications.

Unlike Mojave, systems with non-Metal GPUs can no longer be accelerated (without some super gross patches). This means that it’s even more difficult to run a Vanilla system with older GPUs, so we recommend upgrading when possible similar to the Airport Atheros situation.

To get around these problems, we have a whole guide!:

This is also covered in the OpenCore Vanilla Guide already

Should you update and how to proceed

No, the majority shouldn’t update as this is a .0 release meaning there’s going to still be a lot of bugs hiding within potentially causing many headaches. The best practice is to wait until either 10.15.1 or even 10.15.2 as the majority of bugs will have been fixed by then.

Regarding how to update, make check the following:

For those who want the terminal command for the USB:

What’s new in the Hackintosh scene?

A new Boot Loader has appeared!

From the folks that brought you the many wonders of the Hackintosh world as Lilu, VirtualSMC, WhateverGreen, AptioMemoryFix and so much more are here to present the next step in hackintoshing!: OpenCore. Currently in beta, what OpenCore wishes to accomplish is to make the Hackintosh environment more like a real mac by adopting many of these features and guidelines like Bless support and little to no ACPI patches. As things are now, most users have no reason to switch to OpenCore but as time goes on Clover may become more and more aged to the point that for many it will become too unstable.

The most interesting part about OpenCore for AMD users is that this will alliviate most of the fear around macOS updates, specifically that the kernel patches will no longer need to be updated for every single minor OS update. The reason being is that the actual patches around AMD CPUs rarely had drastic change, instead just needing to re-caluculate the offset for each update. Well with OpenCore, we’re now able to specify a mask meaning that it’ll figure out the offset for us. But this still isn’t utimately perfect, reason being is Apple can always throw a curve ball like they did with 10.13.1-.3 vs 10.13.4-.6 but this is still great news. But the downside is that Clover users won’t be getting macOS Catalina as AlGrey has no intention to work with Clover ever again instead letting others convert the patches, so better learn how to make your patches!

OpenCore Catalina AMD patches have be posted on both the AMD OS X Discord and linked here(Patches work with all versions of High Sierra, Mojave and Catalina):

For those who are wanting a Vanilla Desktop Guide for OpenCore are in luck!:

Please note that we’re currently in beta but hoping to be in 1.0.0 release by the end of the month.

So as some of you may know or learning just now, AptioMemoryFix is now dead and will no longer receive any future support. If you’ve checked the GitHub page for AptioFixPkg, you probably read the following:

AptioFixPkg is now part of AppleSupportPkg and OpenCore, please use them instead:

The problem with this is that this means support for Clover is completely dead and if you want the latest in firmware fixes you’ll need to completely ditch clover for OpenCore. And you may read the FwRuntimeServices part but this is also exclusive to OpenCore so don’t even try loading that with clover.

But AptioMemoryFix won’t be gong anywhere thankfully, you can still download the final release from the github.

Not really, your other option being osxaptiofix3drv but that’s not ideal for many people. As things stand, AptioMemoryFix still works perfectly fine but do note that for both future releases of macOS and newer hardware may not work correctly with AptioMemoryFix

A fairly simple change but one that will catch people off guard, so starting with Clover r4985 we see that the placement of .efi drivers have changed a bit:

But do not fret, the old paths will still work as long as there’s no files present in the new directories

Got SIP off and updated chrome? Well shit likely broke cause Chrome deleted a /var symlink, I’ll point you to some posts that are better at explaining this than me:

Hope you found this not so little post helpful,