Ever since UEFI, the disk default partition map format is GPT (GUID Partition Table), which added support for more than 2TB of disk size and more than 4 partitions that was the limit of MBR while still keeping a backward compatibility with MBR for legacy systems. If your computer (prebuilt) came with Windows 8 (2012 and later), then your disk is probably partitioned as GPT.

Usually, 2012+ computers that came with Windows 8 would have a UEFI firmware (some OEMs released Windows 7 releases alongside those, so make sure yours has UEFI), and this is a newly spread firmware type (that was in development since the 2000s) and was already deployed on Apple computers ever since the intel switch (but their own heavily modified firmware, it's called EFI and not UEFI for the lack of universality). This new firmware has some new features like Secure Boot, help with faster booting, hardware passthrough, graphical interface with mouse support (and more). To know more about UEFI and Secure Boot check this writeup by Osy86 here (opens new window). Basically, a UEFI boot goes something like this:

Usually, the said "bootloader" is contained somewhere in the disk, and that somewhere is called a EFI Partition. You can find this named different things like ESP (EFI System Partition), SYSTEM, EFI, BOOT and so on. This partition is FAT32 formatted and flagged as EF00 in MBR or C12A7328-F81F-11D2-BA4B-00A0C93EC93B GUID in GPT. This partition contains usually the EFI applications (like an OS bootloader) in it that are loaded at boot by the UEFI firmware (remember this as it is important for later for recovery).

Contrary to UEFI, Legacy systems are older and much more mature (dating back to the first IBM PCs). They're certainly a lot more limited and slower than UEFI on the same system but hold better compatibility with a lot of OSes (even macOS in some rare cases). Computer pre-2012 usually have this type of firmware (some exceptions like servers and some professional laptops and so on that can also have UEFI, they're not reliable thought in that mode). The computer would usually come with a version of Windows that is older than Windows 8 with a hard drive that is less than 2TB. Some desktop users at this time would also install OSes in Legacy mode even if their motherboard supports the newer UEFI standard. This could create issues with multibooting later on.

These systems rely on another method of loading the bootloader. This piece of software is usually written in the first sectors of the disk (formatted as MBR) called boot sector, this sector is usually 512 or 4096 bytes big, the BIOS would then read the code, copy it to memory and then execute it, at that point an OS or Bootloader menu (like GRUB2) will show up:

# Major differences between the systems

We'll put them in a table to show the main differences:

Aside from Legacy hardware support (which is rare anyways nowadays), UEFI is the firmware to use when dual booting on newer hardware (2012+). But for legacy users, there is also a way to get some UEFI features but only through DUET (will be later discussed).

# Detecting which firmware you're using

Then it probably has UEFI system, that said, it doesn't mean older generation motherboards do not, however with Windows 8 release, Microsoft standardized the UEFI specs for OEMs to get their certification (usually if you go with brand names like ASUS, Lenovo, HP, Dell... you're good to go).

Any older than the above and the chances of having a proper UEFI implementation diminishes and you're better off with a Legacy booting.

Open Run (Win + R) and type msinfo32, you will be greeted with this window: 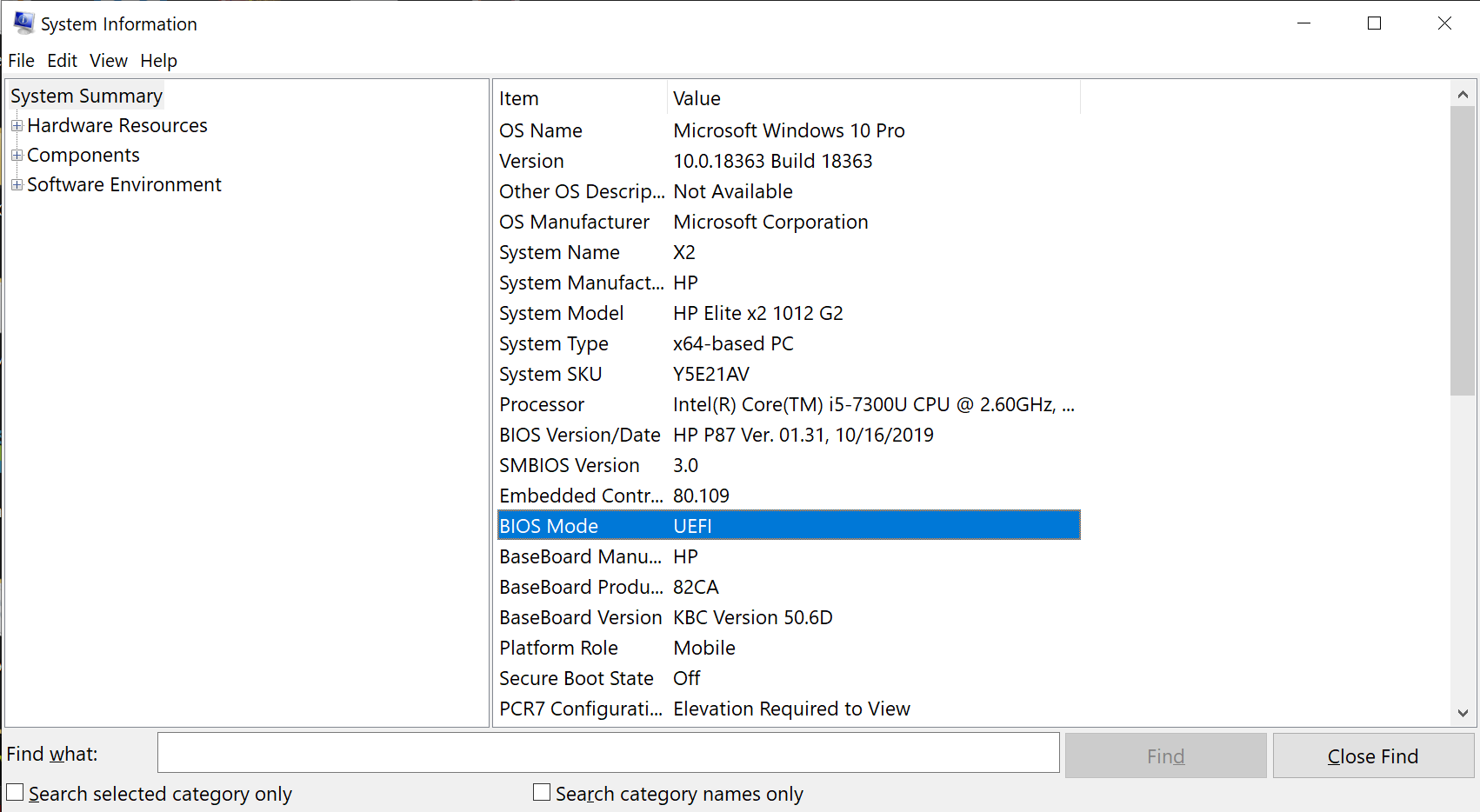 Check BIOS Mode, it will either say UEFI or Legacy. Note that this is for Windows 8/10, if you're using Windows 7 or older, you're probably running it in Legacy mode.

On most Linux distributions, you can run

If the folder exists, then you're running in UEFI mode. (screenshot credit: Scooby-Chan#7971)

You can also download and run efibootmgr (available on most distributions) and you will either:

# macOS in all of this

macOS requires some special treatment because Apple wants to (pampering their OS), and thus requires a set of rules to get it installed on any drive:

Good luck, and BACKUP YOUR DATA.

⟵ What is it? Disclaimer ⟶