It's that time of year again and with it, and a new macOS beta has been dropped. Here's all the info you need to get started.

Reminder that Dortania and any tools mentioned in this guide are neither responsible for any corruption, data loss, or other ill effects that may arise from this guide, including ones caused by typos. You, the end user, must understand this is beta software on unsupported machines so do not pester developers for fixes. Dortania will not be accepting issues regarding this mini-guide except for typos and/or errors.

This guide expects you to have a basic understanding of hackintoshing. If you are not familiar with it, we highly recommend you to wait until there is an easier and more straight-forward solution available.

More a mini-explainer as to why this release is a bit more painful than average macOS releases, the main culprits are as follows:

With macOS Big Sur, the AvoidRuntimeDefrag Booter quirk in OpenCore broke. Because of this, the macOS kernel will fall flat when trying to boot. Reason for this is due to cpu_count_enabled_logical_processors requiring the MADT (APIC) table, and so OpenCore will now ensure this table is made accessible to the kernel. Users will however need OpenCore 0.6.0 or newer to fix this issue.

Since 10.7, the prelinkedkernel has been the default way for real macs to boot. This contained a very minimal amount of kexts to get a mac booted. This same bundle is what OpenCore uses to inject kexts, and was hoped to last quite some time. With macOS Big Sur, a huge change happened in where Apple no longer makes it the default form of booting.

Due to the hard work of @acidanthera, OpenCore gained experimental support for this new format in roughly 2 weeks (starting with OpenCore 0.6.0), and we can now attempt to boot Big Sur on our hackintoshes without a Mac or VM - although you will likely run into some issues along the way.

Before we can jump head first into installing Big Sur, we need to go over a few things:

Big Sur dropped a few Ivy Bridge and Haswell based SMBIOS from macOS, so see below that yours wasn't dropped:

If your SMBIOS was supported in Catalina and isn't included above, you're good to go!

For those wanting a simple translation for their Ivy and Haswell Machines:

Not much hardware has been dropped, though the few that have:

Also note that AMD OSX has updated their patches, but they are experimental and unsupported and you will not obtain support for them:

And a special note for MSI Navi users, you no longer require the ATY,rom/-wegnoegpu patch to boot the installer!

Ensure that you have the latest version of OpenCore, kexts and config.plist so it won't have any odd compatibility issues.

You will also need to ensure you have a few NVRAM variables set:

If you're unsure what version of OpenCore you're using, you can run the following in terminal:

With Big Sur, quite a bit broke. Mainly the following:

And while not an issue, SIP has now gained a new bit so to properly disable SIP you need to set csr-active-config to FF0F0000. See here for more info: Disabling SIP

For the installation, you'll need a few things:

To grab the Big Sur installer, download the beta profile from Apple's developer portal or the Apple's public beta profile, then check for updates in System Preferences. If you don't have a developer account and want to use the developer beta, you can use gibMacOS to download it:

Press M to change the Max OS, then enter 10.16 to switch the (update) catalog to the Big Sur one.

Press C to change the catalog, then select the number for the developer (for developer beta) or catalog.

Select the number for the Big Sur beta to start downloading it.

Once finished, open the InstallAssistant.pkg that was downloaded - it will be located in the gibMacOS/macOS Downloads/developer/XXX-XXXXX - Install macOS Beta folder. This package from Apple will create Install macOS Big Sur Beta.app in your /Applications folder.

Run the InstallAssistant.pkg and point this to whichever drive you're booting off of, this is where the Install.app will be dropped:

Once done, you should find it located in your Applications folder:

To create the USB is quite simple, grab your USB drive and open Disk Utility in macOS. Next format as follows: 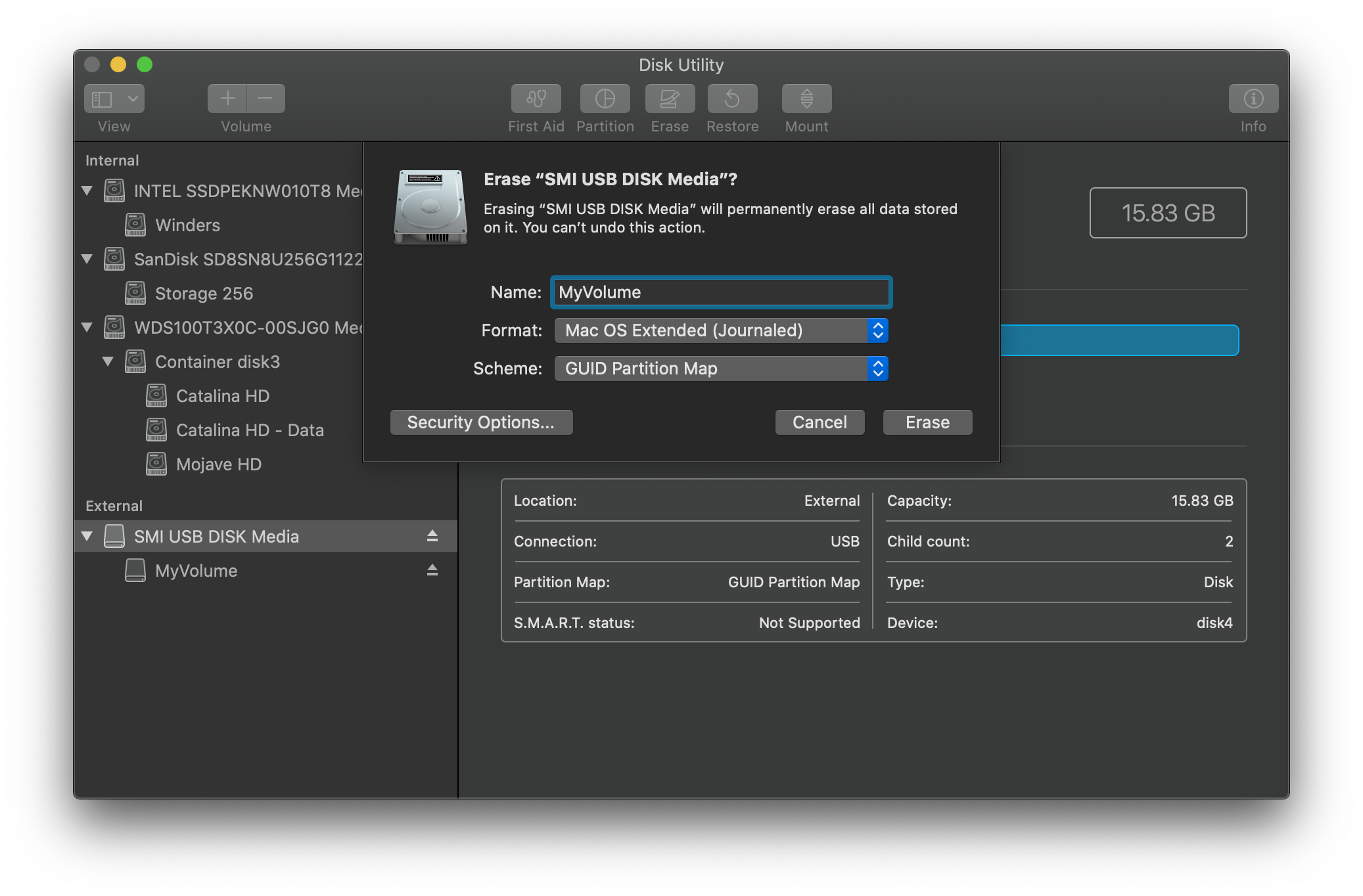 Once this is done, run the following command:

This will take some time so you may want to grab a coffee, once done your USB should be good to boot! (Assuming you updated OpenCore and co earlier)

Installing macOS 11: Big Sur on a Hackintosh is fairly similar to how previous version of macOS were installed, with the main issues being:

For the last one, if you get a kernel panic with Lilu we highly recommend you to update to the latest version with links we provided above. If errors are still not resolved, you may need to disable Lilu outright.

# Stuck at Forcing CS_RUNTIME for entitlement 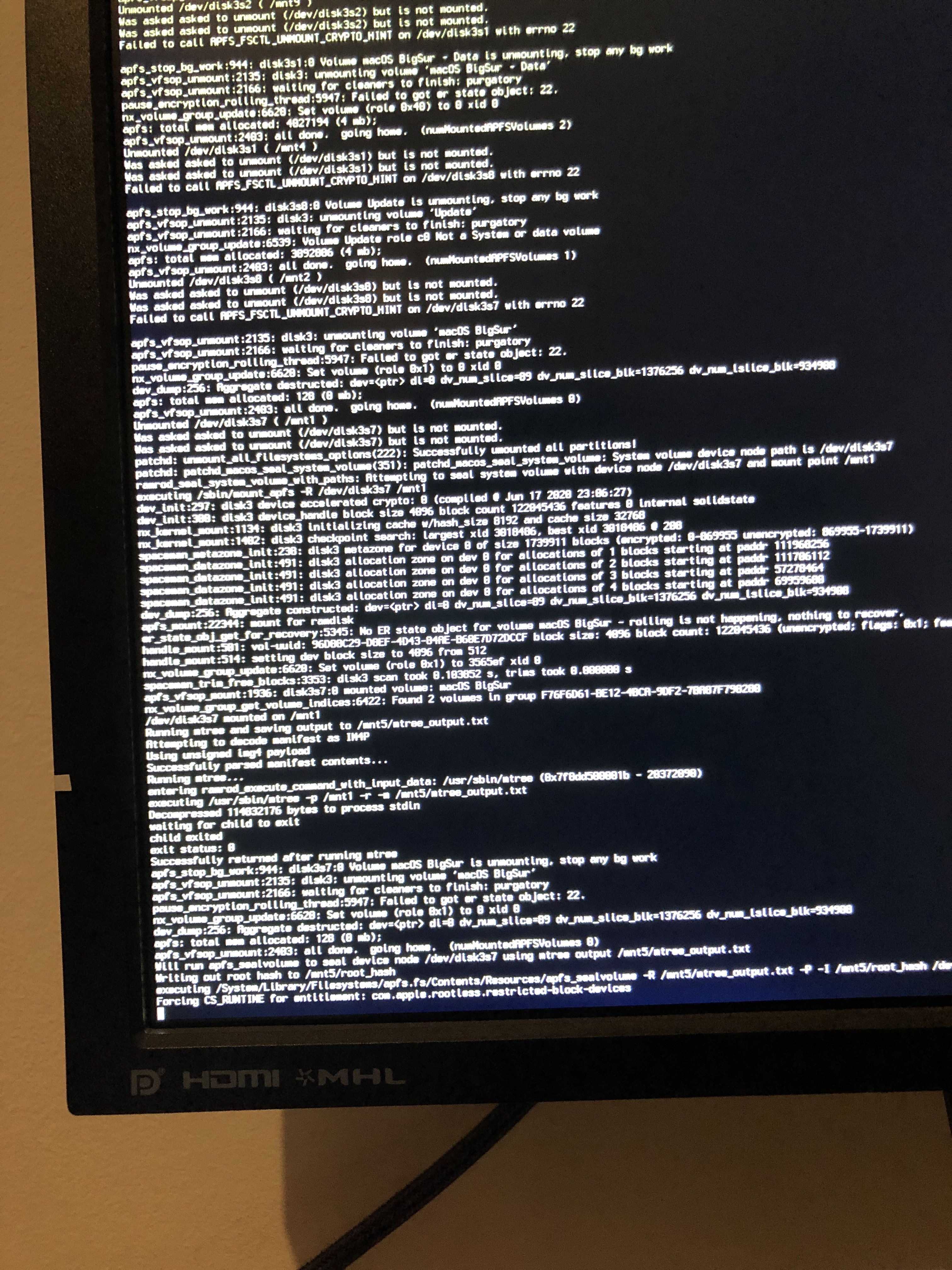 This is actually the part at where macOS will seal the system volume, and where it may seem that macOS has gotten stuck. DO NOT RESTART thinking you're stuck, this will take quite some time to complete. 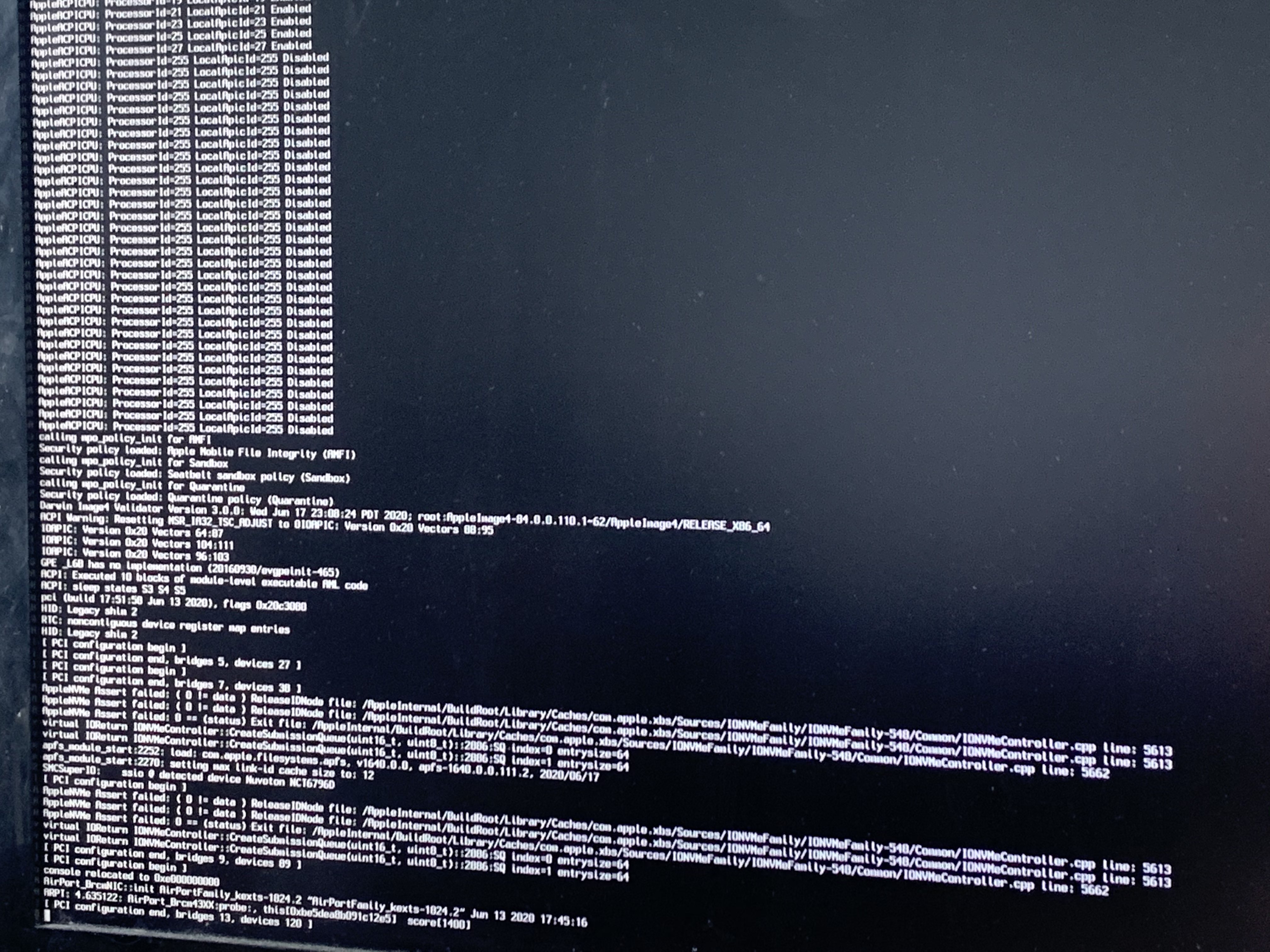 As previously mentioned, Intel HEDT motherboards may have some issues revolving around their RTC device in ACPI. To resolve, you'll need to look at your RTC device and see which regions are missing. For more information, see here: SSDT-RTC0-RANGE.dsl 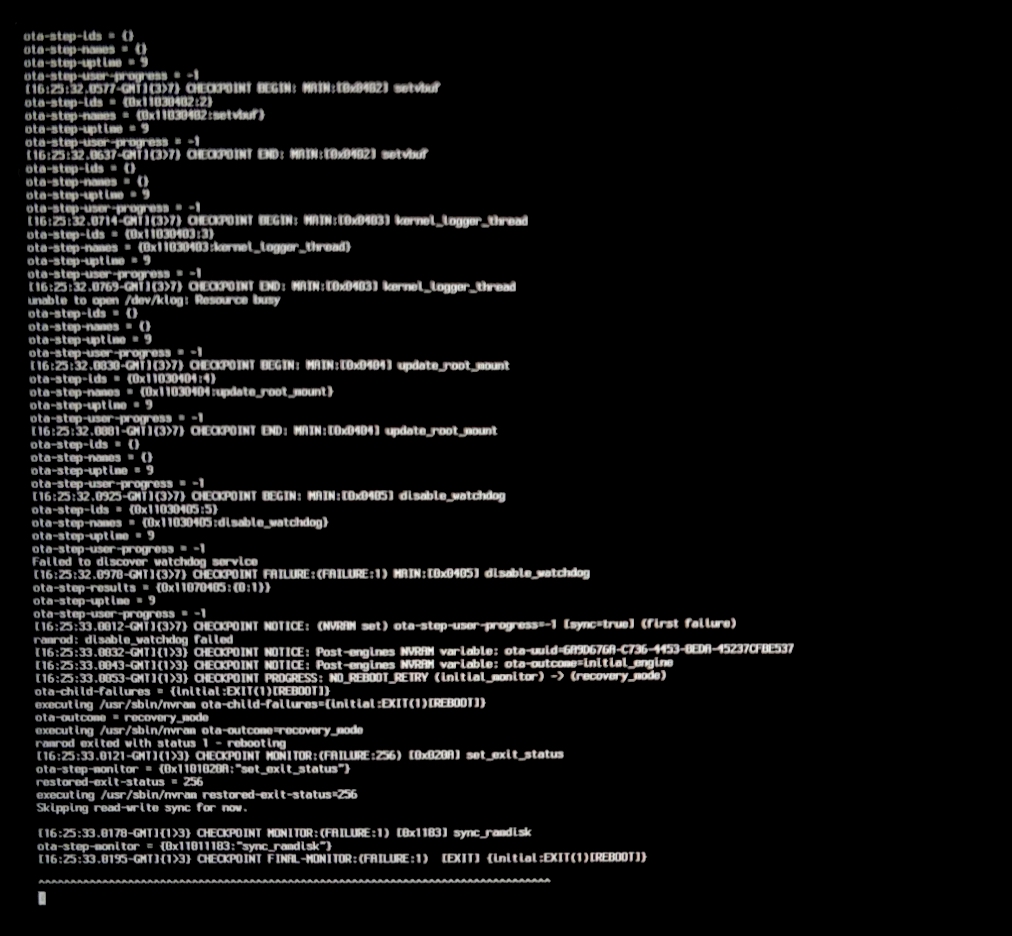 If you get stuck around the ramrod section (specifically, it boots, hits this error, and reboots again back into this, causing a loop), this hints that your SMC emulator is broken. To fix this, you have 2 options:

And when switching kexts, ensure you don't have both FakeSMC and VirtualSMC enabled in your config.plist, as this will cause a conflict.

This is due to an unused uncore PCI Bridges being enabled in ACPI, and so IOPCIFamily will kernel panic when probing unknown devices. To resolve, you'll need to add SSDT-UNC to your system

With Big Sur, macOS has become much pickier with devices being present in ACPI. Especially if you're injecting important properties for WhateverGreen or AppleALC, you may find they're no longer applying. To verify whether your ACPI defines your hardware, check for the acpi-path property in IORegistryExplorer: 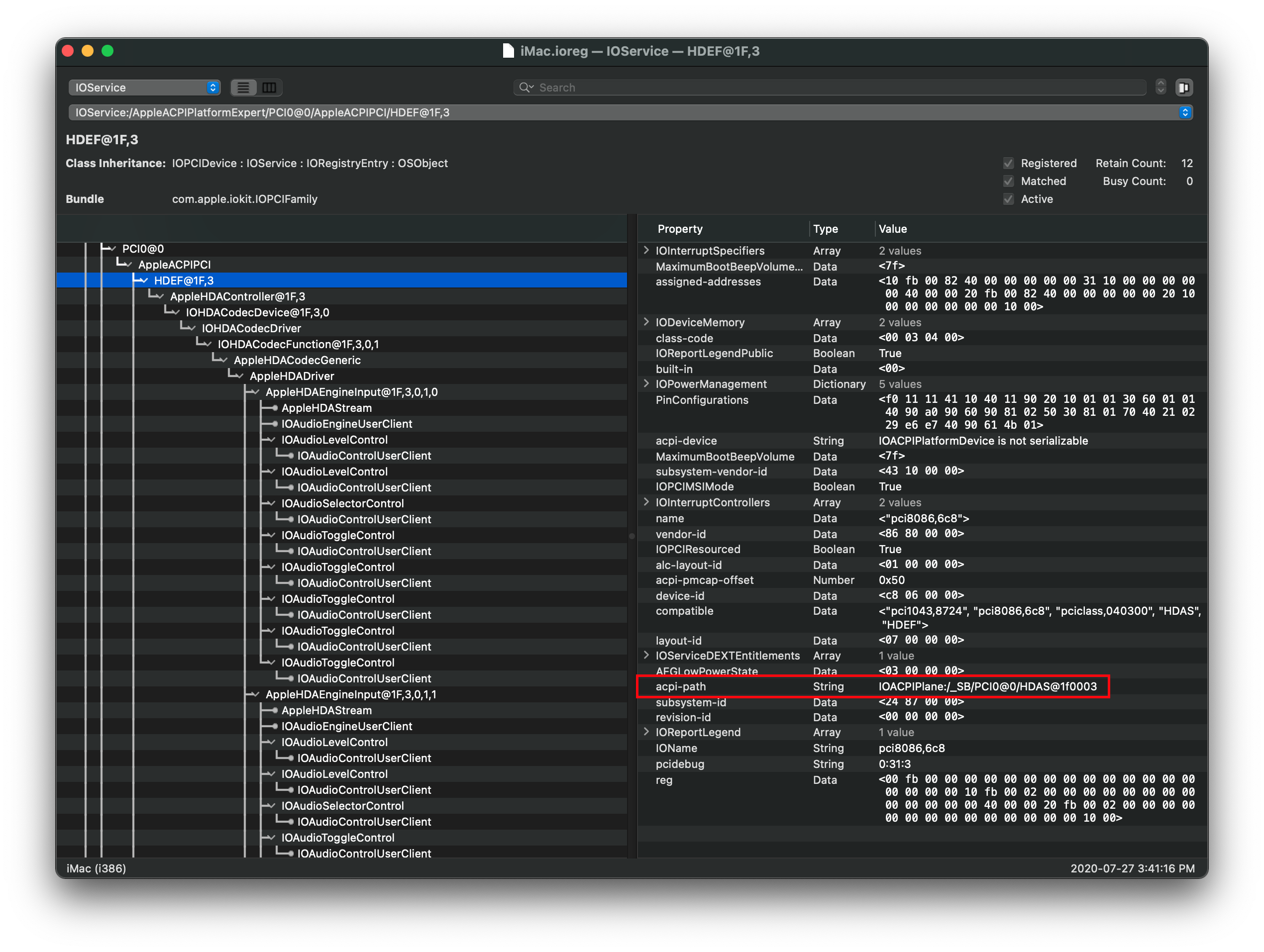 If no property is found, you'll need to create an SSDT that provides the full pathing as you likely have a PCI Bridge that is not documented in your ACPI tables. An example of this can be found here: SSDT-BRG0

For certain legacy systems, you may notice that while the USB ports work your HID-based devices such as the keyboard and mouse may be broken. To resolve this, add the following patch:

# Early Kernel Panic on max_cpus_from_firmware not yet initialized

If you receive an early kernel panic on max_cpus_from_firmware not yet initialized, this is due to the new acpi_count_enabled_logical_processors method added in macOS Big Sur's kernel. To resolve, please ensure you'er on OpenCore 0.6.0 or newer with the AvoidRuntimeDefrag Quirk enabled.

With Apple's new snapshotting for the system drive, they now depend heavily on this for OS updates to apply correctly. So when a drove's seal is broken, macOS will refuse to update the drive.

To verify yourself, check that Snapshot Sealed returns as YES:

# Some kexts may not be compatible with Big Sur yet

There are a lot of kexts out there, and Big Sur is still pretty new. Not all kexts are working yet, so if you're experiencing a weird kernel panic, one thing you can try is booting with only the essential kexts (Lilu, VirtualSMC/FakeSMC, WhateverGreen) and seeing if it works. If so, you can enable kexts one by one to try to narrow down the issue.

If you're still facing issues, or if with a new beta things break, you can try the virtual machine route to install on a disk and then transfer it over to your hack. Follow the following instructions to build install media and then install in a hypervisor.

Note: If you have an AMD CPU, this method isn't going to work.

Once you have the installation software installed to /Applications you will need to create a VDI of the installation media that will be used to install macOS in your VM. The instructions below are intended to be cut and pasted without editing unless specified.

First, set the IMAGE variable to the name of the installation you are installing. The example defines the image for Big Sur.

Next, create an empty 16GB image to host the media.

Verify that you have a 16GB file named "Install macOS Beta.img" before continuing. After that, attach it to your macOS system as a virtual disk using the variable you created earlier.

Run diskutil list and verify that you have a disk attached that is type "disk image".

Now that the image is mounted, format it to Journaled HFS+.

Once the image is formatted, create the installation media.

You now have a raw image of the installer. Follow the appropriate page for the hypervisor you'll be choosing: